Caleb Leach is a 6’3 210lb Tight End/ Receiver from Many High School (Many, Louisiana). Leach is a big time athlete who has the versatility to be able to line up at either the tight end or slot receiver positions and also thrives on special teams. Is currently ranked as the third best receiver in the state of Louisiana. Caleb has the size, hands, and route running abilities to make for a threat at the passing game on every single play. Excellent ability to split defenders and get open downfield. Knows how to use his size to catch balls in traffic and block out defenders. While on offense, Caleb plays with a defensive mindset; playing very physical and explodes at the point of attack when blocking. Always the motivator, Leach is looking to lead his team to a successful 2018 season. 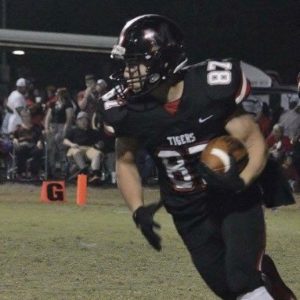 Who do you model your gameplay after?

Jason Witten because of his all-around game and the way he can read the line backers so well. He just knows how to get open so efficiently and I feel that we share that quality.

What area of your game would you like to improve on this off-season?

I would like to improve on my speed and staying engaged in blocks downfield more.

What would college coaches be most impressed with about you?

My upbeat attitude and my willingness to learn. I play hard every time I step on the field and I’m always looking to get better.

What kind of student are you in the classroom?

What have you learned about yourself while playing football?

That your mind plays a big part of your game. You can’t let your mind control you, you have to learn to control it. Through football I’ve learned to be a man and that pain is only temporary. It has also taught me to have more family even if it isn’t blood.

What would you consider your biggest strengths as a football player?

My ability to split defenders and get open on routes. Also my blocking skills I feel are a huge asset to my game.

What would your coach say about you?