Cooper Ezard is a Wide Receiver in the class of 2021 for Camdenton High School in Camdenton, Missouri. With his build of 6’2” and 205 lbs. along with his exceptional skill, Ezard is a defensive coordinators worst nightmare. His versatility on the field is what makes him such a great player as he can block anyone on the field as well as being able to catch any ball thrown his way. His ability to win 50/50 balls is amazing and nearly no defender stands a chance against him once the ball is in the air. That not all though, he is also able to beat defenses overtop with his incredible speed and quickness. Ezard is the ideal do-it-all receiver and with all his potential, we should be excited to see what he can do in the future.

When did you start playing football and why? My dad and my uncle both played at Missouri state, they both coach at my high school now, and ever since I was young, I was just brought up into football.

Favorite moment of your career so far? We have a hog that we run out of before games and running out of it is amazing, seeing all the fans before a big game is awesome.

What current or past player do you think you play like the most? Our quarterback from sophomore year, Paxton DeLaurent, he showed me how to be a good leader and broke me out of my shell.

Do you play any sports outside of football, and what do you think you adds to your game? Track, it adds flexibility and made me a lot faster.

Do you have any pregame rituals? I listen to a lot of Christian music and then before the games I will listen to pump up music.

What motivates you to get up and train every day? I have a vision board and pictures in my room, when I wake up the first thing, I see is all of these athletes and it motivates me to get up and keep working.

What do you think makes you a good teammate? I was the team leader this year, so I have the ability to lead and speak to the team.

Who has pushed you most in your football journey? Paxton helped me a lot, but I have pushed myself the most, I want to become the best player I can be.

What do you think sets you apart from other athletes? My uncle says, “you’re a punk, and that’s what makes a good football player.”

What do you think the best part of your game is? My hands and my footwork.

Would you consider yourself a possession, speed, or route running specialist? I’m fast and have great route running, but at the end of the day if the ball is in the air, it is always mine, I will always pull it down.

Do you prefer to be pressed by the DB or not? I like press coverage, I like looking at the DB pre-snap, I also like being physical at the line and making my release.

Do you like going up against man or zones more? Man coverage.

What is your favorite skill move in open field? I don’t really do skill moves, if a defender is dumb enough to get in front of me, I’m going to run him over.

What is the best catch you have made in game? I caught a ball against Waynesville and the defender almost picked it off, but I took it back from him.

What are you thinking pre snap? I just want the ball, if it comes to me, I’m going to catch it. 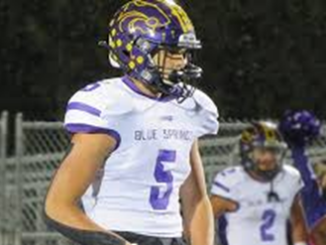 Diamond In The Rough: Carson Willich 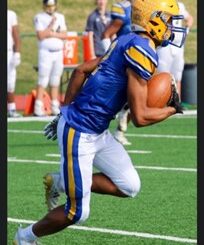 Diamond In the Rough: Caleb Merritt