Lancaster High School 2021 RB Da’Qualen “DQ” James is a two-sport standout listed at 5’7 and 180 pounds. He is explosive and uses his elite track speed to breeze past his opponents. He rushed for 837 yards while averaging 9.5 yards per carry and 10 touchdowns his junior season. He also earned first-team all-district and contributed to Lancaster’s 11-3 record and Texas 5A D-I state quarterfinal appearance. On top of his numerous football achievements, DQ has shown exceptional speed as demonstrated by his reported 10.83 100-meter time. In March of this year, he was a part of the 4×100 team that posted the fastest 4×100 relay time in the state and nationally in the short outdoor season. James committed to Hawaii in April making him the first commit to the University of Hawaii’s 2021 recruiting class.

I started playing in the second grade. I saw my older friends play football and they would always tell me, “You’re fast! You should play football.” So I said I’d try it and after that, I just started rocking with it.

My favorite thing about my position is making my opponents miss. Making them miss, embarrassing them, and juking them. Basically, what I like doing the most is getting the ball, juking, score, and block. Making sure my quarterback is straight because there are some plays that I have to protect my quarterback. He’ll give me the ball and I’ll just take it to the house and do what I have to do to get a touchdown.

The fans! The fans most definitely, those Friday nights. The team has energy and when I hear the fans get louder when I break away from a defender and I get a long touchdown. Oooooooh! Makes my adrenaline start pumping!

I see that you run track! How would you say that helps you on the football field?

There’s a saying that says, “Speed kills.” With that being said, speed does kill. Track has helped me with a lot. I can outrun my defender without even juking or anything, without even making a move. Just one cut and go.

I almost came close to my goal last year. I want to hit 1200 rushing yards. I want to have at least 15 or 16 touchdowns.

Yes, I do! My favorite NFL player is an old school player named Barry Sanders and I have a new one! He’s new generation and in the NFL. His name is Saquon Barkley. My favorite college athlete was D’Andre Swift. He went to Georgia.

I play because of my big brother. My big brother. He’s my motivation. He was murdered during… I want to say my sophomore year of high school and ever since then, he’s motivated me to keep going. He always used to say he wanted to see me in the NFL and my T-lady (his mom) too. I use my T-lady as motivation as well. I have a lot of people that look up to me, so that’s what keeps me going.

Play the game and watch film. I like 2K and Madden.

I saw that you committed to the University of Hawaii. What made Hawaii different than the rest of the schools that offered you?

Business. I want to own my own business. I also want to do Agricultural Management. That’s the path that I’m on right now in high school.

What is something you would like to improve on?

I just want to get stronger, faster, hard to tackle. Get these grades and pass all my classes! I want to go ahead and leave early to get where I need to be.

They always judge people by their height. Height really doesn’t matter. It’s just heart over height. If you have a big heart you can do anything. If you have a goal, chase the goal and do what you have to do. Don’t let anybody stop you. 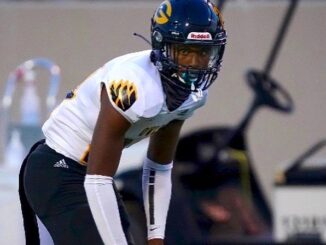 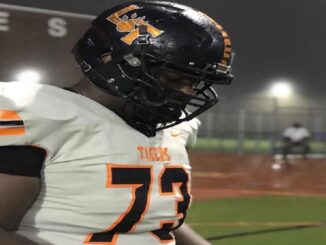 Diamond in the Rough: Joseph Amos 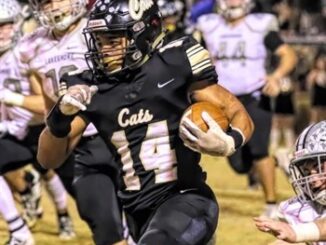