Kaden Moreau is a Tackle prospect in the class of 2022 and plays for the Pineville Rebels out of Pineville, Louisiana. At 6’5 and 265lbs, Kaden is a monster in the trenches. He brings a good combination of size and strength to his position as he never gets pushed backwards off the line and end basically every play with a pancake. Not only does he bring strength, but he brings good speed and agility as well. Moreau has a quick first step at the start of the play, with this and his agility/speed, he can get off the line and be the lead blocker for his Wide Receivers and Running Backs. Kaden Moreau has the tools to exceed in both aspects of the game since he is great at creating holes in the run game and can drive the defenders away from the play in the passing game.

Tell me about yourself, what are some things you are into? I like hunting, fishing, mudding, four wheeling, and tubing. I really like being outside. I am an encouraging person; I never give any judgment. Other than that, I am the type of guy to give 100% effort all the time on everything I do, not just football. Whether it is cooking or brushing my teeth, I try to cook/brush better than everybody else. I am super competitive.

Are you looking forward to anything coming up? I am actually going to the ScoreU football camp coming up, so I am excited to do the 1-on-1’s, drills, and just getting my name out there more.

Do you play any other sport? I do the shotput and discuss on the track team. It looks like the shotput hurts, but if anything, it hurts my shoulder if I hold it wrong.

How did your first offer feel? Is anybody helping you with it? My first offer came from Northwestern in Natchitoches. It started when the defensive coordinator (Mike Lucas) saw a post I made on twitter and we just started talking. After a couple of weeks, the offensive line coach called me saying he had great news. Then Mr. Mike officially gave me the offer. That was the best feeling in the world, it was extremely weird and just awesome.  My girlfriend’s dad helps me with recruiting, her dad has some recruiting business and he helps me get in touch with coaches.

When did you start playing football? Whenever I was younger, I played in Alexandrea for one year, when I was like 6–8-year-old. We moved away and I stopped because there was no football where we moved to. We moved back to Pineville my 8th grade year and that is when I started back up playing football. I have not been playing too long, but I got the hang of it quickly. At first, when I started back up, I sucked. But as soon as high school hit, it came with great ease.

What made you get back into it? My friend Ethan helped me, he played it for a long while. He probably started at 5 or 6 and he is still playing. In junior high he asked me to try out and see what happens, so I was like “sure, football seems fun.” I tried out, I made the team, and I have just been getting better since then. Now Ethan and I are both varsities playing right next to each other, he plays left guard and I am a left tackle.

What motivates you to get out and practice every day? What is your why? My family and friends for sure, they give me a lot, they help me with certain stuff, they put me through school, they give me a house to live in. Some people just see them as small things and take them for granted. The best thing you can have is your family and friends, having people that want you to be successful and want you to do great things is awesome to have. I can appreciate that.

Is there anybody that you look up to/aspire to be? I do not think so, there are obviously people I appreciate that helps me out, but I do not aspire to be somebody else. I want to be my own person and give credit to people that helped me on the way though.

What NFL player do you try to model your game around? Probably … I would say, Taylor Lewan. He wears 77 just like me and plays Left Tackle just like me. I would also say Quinten Nelson too.

What has football taught you about life and yourself in general? It taught me that hard work does not come easy, if you want to be successful you have to earn it, it is not going to come easy. Everything has a price tag on it. As for myself, you are always going to be nervous, but it taught me how to be calmer and more rational over time, as well as it helps me be able to learn things easier. It taught me that I am a calm person and I do not get as nervous anymore. It helps with a lot of things that you do not realize. 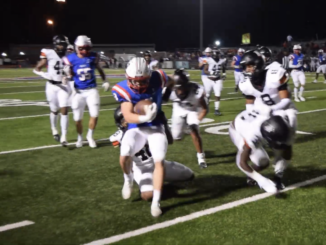