One of my favorite jobs here at Gridiron Football is traveling the state to find prospects. Since starting this company in 2014, I have driven over 350,000 miles, from Lake Charles, DeRidder, Pineville, Ferriday, Baker, New Orleans, Lake Providence, Jena, Many, Minden, Ruston, Jonesboro-Hodge, Morgan City, Baton Rouge, Slidell, Shreveport, and so many more places.

In this series of articles I will write, I want to share some of these players I have met and personally seen play this game we all love. (After all, if you are reading this, then you must have some liking to the game of football.) These players are in no particular order. I just want to show how talented the state of Louisiana is in football.

My first prospect on this list is Woodlawn’s QB Rickie Collins (Class of 2023). Over the years I have heard that you do not recruit quarterbacks from Louisiana. I think that is about to change. Rickie is nearly 6’4″ and has a “laser” arm. He can make every throw on the field. He has exceptional mechanics and poise in the pocket. In his first two years in high school, he has amassed more stats and awards then most guys in four years. Rickie has already started getting noticed from all over the region by schools, but this past weekend, The Ohio State University took notice. This kid has power 5 potential and will be a big time playmaker for years to come.

Lets stay with quarterbacks and move across town to Madison Prep. Zeon Chriss (Class of 2022) is a rising star in the city. He just won the state championship and was crowned MVP of that game. He has put the nation on notice in 7v7 this spring while playing for KREAM Elite. Zeon has unbelievable talent. He brings more to the table then just his arm. His mobility in the pocket makes him a dangerous QB. Zeon has received several power 5 offers already and looks to gain more attention as the season nears.

Driving over to Lafayette on 50 miles away, lets look at St Thomas More’s QB Walker Howard (Class of 2022). I have watched this young man mature since he was in seventh grade playing at Ascension Episcopal Middle School. Following in his father’s footsteps, Walker is currently an LSU commit. Walker has a good size and frame. He is also an accurate passer with great footwork. Walker works hard both on and off the field everyday trying to get better. He is one young man that will make Tiger Nation very happy in the coming years.

Lets drive northwest about an hour and a half to the little town of Rosepine. Here, very few have ever gone to college on a football scholarship, but things are changing. QB Ethan Frey (class of 2022) is the most underrated player EVER!!! Ethan is currently listed as an LSU commit in Baseball and will be drafted after his senior year in high school. However, after watching him play over the years, I think if the NFL could draft guys out of high school, Ethan would be a 5th round pick right now. He is a 6’5″ 220lbs QB that can run a 4.7/8 forty and has one of the strongest arms in the state. Very accurate and can make every throw on the field. I look for teams to jump onboard after he attends his first football camp next month in Houston, Tx, the SPE camp on April 24th.

Now, drive 60 miles south to Lake Charles and lets visit LCCP. They have several guys on their roster that can and will be playing on Saturday. ATH Keshlon Jackson (class of 2022) is one of these guys. Keshlon is already committed to Oklahoma State University. Keshlon is kinda like your swiss army knife for your team. He does it all for LCCP. I look for him to play wide receiver for OSU though. He is a speedy guy that makes great cuts on the ball.

Jumping on I10, and head over to Jennings where we find RB Trevor Etienne (Class of 2022). He is the brother of Clemson’s running back Travis Etienne. Trevor, like his brother is an elite back with over 23 offers already.

Getting on I49 and head north about 85 miles, we come to Pineville. Here we will see a huge Offensive Tackle in Kaden Moreau (class of 2022) at 6’5″ and 265lbs. He has been coached by one of, if not the best o-line coach in the country in Darin More. Kaden that big strong lineman with a mean streak that every school would want. This is a big time prospect that some school will get for a steal.

Before we leave the area, lets go five miles up the road to Tioga. Here we will find a nasty nose tackle in Amery Edwards (class of 2022). Amery is 6’2″ and weighs 315lbs. He is strong at the point of attack and demands double teams. Amery is your typical odd front tackle that you can depend on every play and will make your defense better. I think he is listed as a DII prospect right now, but as the season approaches, I look for him to move up some boards.

Now lets go an hour and a half north to Jonesboro-Hodge and take a look at WR JaMarriyea Lewis (class of 2022). Lewis plays both defensive back and wide receiver for his small school, however he is not your small town guy. He can compete with the big guys. He is 6′ and weighs 180lbs. His 4.5 speed is impressive but that is not what catches my eye about him. He is always around the ball no matter where it is in play. He is the true definition of a playmaker.

Headed north about 45 min we come into Ruston. Here we will fin Center Micah Scheer (class of 2022). Micah is a bulldozer in the middle of the line. At 6’2″ and 285lbs, he is a hard man to move. He is explosive off the snap and strong at the point of attack.

Jumping on I20 and headed west about an hour to Shreveport. At Captain Shreve you will find WR Kendrick Law (class of 2022). Kendrick being recruited to play for LSU and would be a huge prospect for the Tigers. I have seen this guy play this spring on the 7v7 circuit. He is a big time playmaker. Has great use of his hands and is hard to defend. I would predict that this guy will be a super star at LSU.

Staying in Shreveport and going across town to Green Oaks High, you will find WR Decoldest Crawford (Class of 2022). I have seen Decoldest play several times over the past couple of years, and every time I see him, he does not disappoint. He is a LSU commit as well and will be a huge playmaker for the Tigers.

Now lets head east on I20 to the big city of Lake Providence and take a look at General Trass QB Wydett Williams (class of 2022). I saw this young man play in the playoffs this past year against St Helena. Wydett is a dual threat QB that can make big plays. Wydett has the skills to play at the FCS level.

Headed south to Ferriday we will find Offensive Tackle Dontavious Henderson (class of 2022). At 6’4″ and 330 lbs he will most likely play guard at the next level. He is strong and plays hard.

I know I did not mention hundreds of guys from all over this state. So stay tuned for part 2 where we will start in Slidell and take a trip around the state again. Until next time, have a great day. 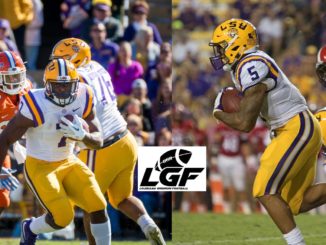